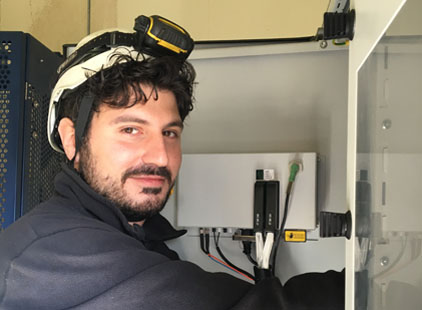 A few years ago I tried to imagine a possible, even if fanciful, future. If someone had said to me that it would go exactly as I had imagined, I definitely wouldn't have believed them. But here I am, writing what has happened to me over the past few months.

My name is Stefano and I have been part of this big family since 2015. I started my job at ERG as a turbine technician, to then take on, one year later, the role of Operating Unit Manager, with a team of five colleagues. In tandem with this role, I was entrusted with the coordination of the major internalisation project for the Vestas Multi-megawatt towers, in Italy.

A few months ago, put of the blue, the chance came to go to Germany and take part in a project similar to the one realised at home. A new challenge? I adore challenges! And there are so many. The language, first of all, my family, and then the bureaucracy, not to mention the job itself.

Starting from scratch, finding a new team spirit, gaining confidence again in what I do. They are undoubtedly stimulating tasks, but I have to say it hasn't always been easy! Discovering a new country, however, cannot be beat. New traditions, new customs. Just to mention one: during a conversation with a neighbour, I found out that here in Germany the "search for freedom" is considered a primary instinct.

Which is why escaping from prison is not even a crime! So would I be willing to change again? Absolutely yes! When change means a new and genuine challenge, why ever not?