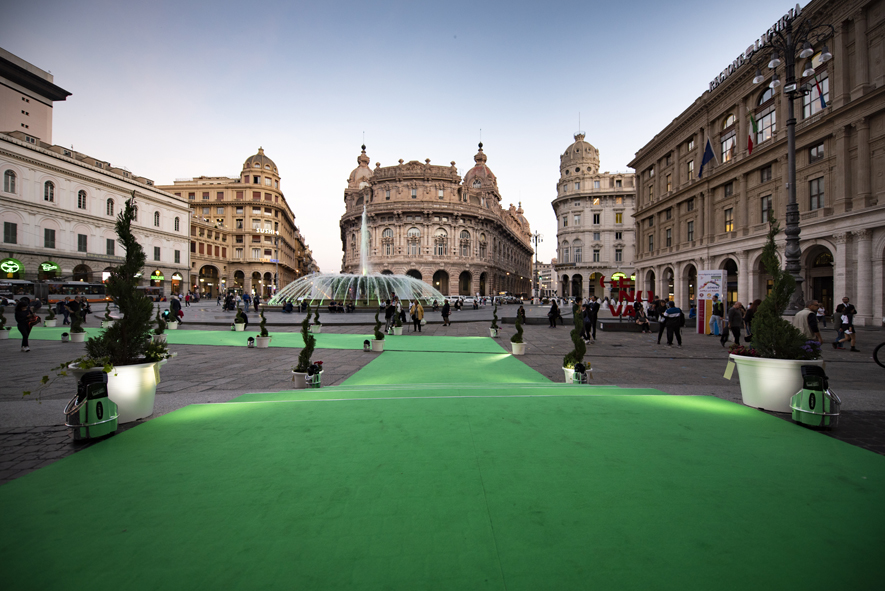 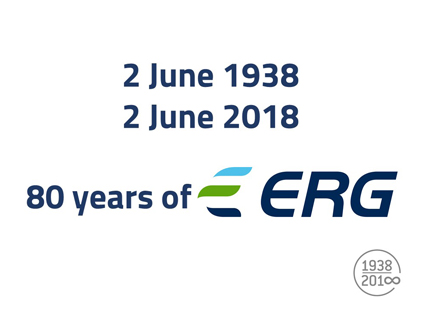 On 2 June 2018, ERG celebrated 80 years. A long and fascinating journey into energy interlaced with the history of our country.

Over these years we have combined growth and creation of value with sustainable development. Our 80th anniversary coincided with the completion of our change of business: we sold our last asset in the oil sector (TotalErg) and, after the wind and hydroelectric sectors, we entered the solar energy sector.

Our 2018-2022 Business Plan, with which we presented our new logo, outlined the new guidelines for the company's "renewable" development.

The event to celebrate our 80 years included the exhibition "Evolving Energies", during which the Palazzo Ducale in Genoa was transformed into the "Palace of Energy". The exhibition traced the key landmarks in the history of ERG, from 1938 to 2018, against the backdrop of the Italian and international events that took place at the same time.

The arcade of the Palazzo Ducale also hosted a 3D virtual reality space "The Power of Change", where visitors used special visors to explore some of the most evocative locations of ERG plants: from the Marmore waterfalls, which powers one of its hydroelectric power plants, to the countryside of Puglia and Sicily, where some of its wind farms and photovoltaic plants are located.

The arcade of the Palazzo Ducale also hosted the "ERG for Young" area, dedicated to younger visitors with workshops and content designed specifically for children, thanks to the contributionof the Edoardo Garrone Foundation, Festival della Scienza and Flying Angels.


During the event, after Chairman Edoardo Garrone's speech, the book "ERG. Da sempre un passo avanti" (ERG. Always One Step Ahead) was presented. This photographic book is dedicated to the history of ERG: a true journey through the most important pages of the company, against the background of the events that took place in Italy during this period. 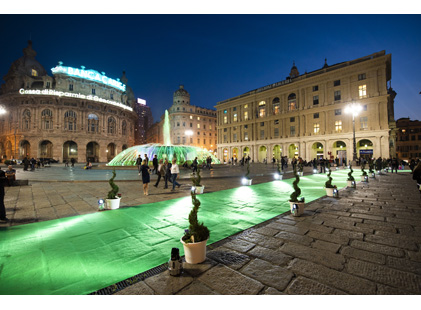 Antonella Clerici, hostess of the evening, and Alessandro Plateroti, Vice Director of Il Sole 24 Ore, interviewed Alessandro Garrone and Luca Bettonte on the most significant moments of ERG's history. After an exciting performance by pianist Elisa Tomellini with the Teatro Carlo Felice Orchestra, the showman Rosario Fiorello took the stage and entertained the guests with his show "Stasera Fiorello".

2018 was also the 80th anniversary of the Istituto Gaslini in Genoa, a centre of excellence for the treatment of childhood diseases at international level. To celebrate this important anniversary, ERG gave its support to the Cilla Liguria Non- Profit Association for the construction of an Accommodation Centre for families with children hospitalised at the Istituto Gaslini, inside the Convent of the Capuchin Sisters of Quarto dei Mille. The Accommodation Centre has 16 small flats, service rooms and common areas made available to the families of children coming from all over Italy and the world. The construction of these facilities is also funded by Fondazione Carige and Duferco Energia.

To mark the celebration of ERG's 80th anniversary, the parent San Quirico S.p.A. and ERG S.p.A. signed an agreement providing for the gratuitous assignment of 80 ERG treasury shares in favour of each employee of the ERG Group's Italian companies. Furthermore, ERG decided to allocate to the employees of all the Group's companies an extraordinary award of EUR 1,500 which, as regards the overseas company employees, will be increased by a sum corresponding to the value of the shares assigned to individual Italian company employees.

The overall amount of this award is estimated at around EUR 1.1 million. Lastly, as a tribute to the community where the Group was created and developed, ERG decided to donate EUR 1 million to the Municipality of Genoa, to be allocated to the requalification and sustainable development projects in Val Polcevera following the collapse of the Morandi bridge in August 2018.

The celebrations for our 80th anniversary highlight how our Group's commitment towards the local area where we operate continues to inspire the way we do business.
#ERG80: 2 June 2018
#ERG80_Spot TV 30 sec
ERG celebrates 80 years of energy history
The Garrone and Mondini families, through their holding company, propose and finance the gratuitous assignment to each employee of 80 ERG shares

Press release - 20 October 2018
ERG celebrates 80 years of energy history
The Garrone and Mondini families, through their holding company, propose and finance the gratuitous assignment to each employee of 80 ERG shares