Active participation in round tables

We take part actively in round tables with Institutions, either directly or through business associations. During the year we signed a number of guideline documents: of particular relevance is the document submitted to the European Community to support the development of renewable energies and the document to support the dissemination of long-term PPAs (Power Purchase Agreements).


Call for the increase of RES (Renewable Energy Sources) by 2030

In April 2018, together with Wind Europe - the association of European leaders in the wind energy sector which we are a member of - and other wind and renewable operators such as ENEL, Iberdrola, Acciona, EDP Renewables, Siemens/Gamesa, Vestas, General Electric, Nordex, Enercon, RES and Falck Renewables, we called on the European Council to set more ambitious goals for the development of renewable sources for 2030.

The Clean Energy Package for all Europeans adopted by the European Union at the end of 2016 had in fact set a target of 27% of energy consumption from renewable energy sources at EU level. In our opinion, this objective was too precautionary and not in line with the growing competitiveness of renewables, especially in the production of electricity.

We also pointed out how raising this target was crucial for the fight against climate change and would have also brought substantial economic benefits for the EU, through increased investments in the renewable energy supply chain: from the production of generation plants to components, and from engineering services to wind farm management.

The institutions of Brussels evidently took into account our call when officially defining the 2030 binding targets, since they reviewed this requirement in the new Renewable Energy Directive and increased the target to 32% energy from renewable sources at EU level for 2030. 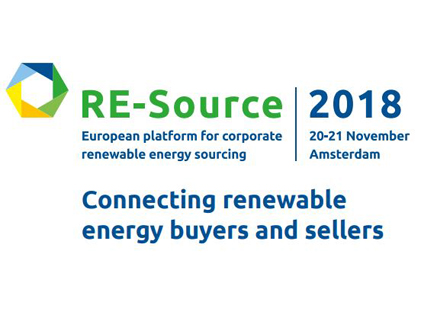 Call for the dissemination of long-term PPA

In November 2018, the 2018 RE-source event was held in Amsterdam. This leading European event is an occasion for renewable energy buyers and sellers to connect, with the prospect of long-term "green" procurement contracts (Corporate PPA).

During the event, ERG, the other RES producers, consumers and business associations signed a declaration to raise awareness in European and national institutions of the importance in disseminating PPAs as contractual tools capable of promoting the construction of RES plants and energy decarbonisation.