The international scientific community is now in agreement that climate change, a genuine threat to the future generations, is largely the result of human activity.

According to the international scientific community the correlation between greenhouse gas emissions and global warming is incontrovertible proof of the link between the two phenomena. On the basis of this evidence, at the end of 2015 the European Union and 195 other countries signed the Paris Agreement during the United Nations COP 21 conference, a milestone in the global effort to combat climate change caused by man.

The Agreement, which came into force in 2016, commits signatories to adopt plans to reduce greenhouse gas emissions in order to keep the Earth's average temperature increase "well below" 2 °C and to take all possible actions to limit this increase to 1.5 °C; the plans adopted must be reviewed every 5 years on the basis of eventual variations from the forecasts

The Clean Energy Package for all Europeans

As far back as October 2014 the leaders of the European Union had set up the "Energy Union", which established three main goals to achieve by 2030:
The CEP consists of eight legislative proposals destined to come into force as of 1 January 2021 including, in particular, the revised renewable energy directive, the Energy Union Governance regulation proposal, the revised internal electricity market directive and a directive regarding common regulations in the internal electricity market. It took over two years of negotiations between the European Commission, the European Parliament and the European Council to draft the regulations; all of the texts have now been consolidated and a large number of the measures have been officially published.

In terms of ERG's business activities, the most interesting parts of the CEP are:
1. the recast Renewable Energy Directive to 2030 (REDII);
2. energy union governance regulation;
3. market design, i.e. the updating of the Electricity Market Directive and Regulation.

The PNEC aims to define the national goals, policies and lines of action that Italy intends to put into practice between now and 2030 to contribute to achieving the 2030 climate and energy goals adopted at European level. The draft undergoes Strategic Environmental Assessment (SEA) and, in parallel, the various parties involved are widely consulted also through a dedicated internet portal.

The PNEC is structured according to the 5 dimensions already identified by the Clean Energy Package and SEN: Decarbonisation, Energy efficiency, Energy security, the Internal energy market, Research, innovation and competitiveness. It also identifies a number of priority measures common to each of the 5 dimensions:
• the development of electric RES in particular PV and Wind – phase out of coal by 2025;
• the prioritisation of measures designed to limit the consumption of soil, the continuity/ repowering of existing RES farms while protecting the landscape;
• streamlining of the permitting process for investments required for the transition and stability of the regulatory framework;
• electrification of energy demand (transport, civil);
• evolution of the energy system from centralised to distributed with self-consumption and RES;
• R&D focused in particular on the storage of energy from RES;
• energy efficiency also in civil engineering and public administration;
• updating of the public governance of the environment and energy on the basis of the carbon-neutral concept;
• assessment of any additional transition tools (e.g. environment tax).

The growth trend in electric RES proposed by the plan involves a non-linear profile: slower growth until 2025, faster afterwards (as foreseen by the SEN) due to the rallying effect of solar energy, while the growth of wind energy will be quicker from the outset. Compared with the economic situation under current policies, the PNEC proposes to make investments of around EUR 184 billion, EUR 52 billion of which in the electricity sector. The planned investments should also create an average of around 115,000 temporary jobs a year in the 2017-2030 period - 18,000 in the electricity sector – as well as around 6,700 permanent jobs in the electricity output sector, net of the departure of fossil fuels and bio energies from the sector.

The EU emissions trading system (EU ETS) was launched in 2005 to promote reductions of greenhouse gas emissions in a cost-effective and economically efficient manner. The system sets a limit on the amount of greenhouse gases that can be emitted by heavy energy-using industries, energy producers and airlines. Emission  allowances are capped by the EU and businesses can buy or receive individual allowances.

The cap is reduced over time so that total emissions gradually fall. The ETS system is regarded as the European Union's main tool for meeting its greenhouse gas emission reduction targets for 2020 and 2030. In recent years the economic crisis has contributed to a fall in emissions and a reduced demand for emission allowances. Together with other possible factors, this has led to a fall in coal prices and the accumulation of large numbers of excess allowances in the system with the risk that the EU ETS is not able to provide incentives to reduce emissions in a cost-effective way or to drive low-carbon innovation.

This market situation, together with the need to adapt the system to the 2030 decarbonisation targets, have made the structural review of the system a necessity ahead of the fourth phase of the Emission Trading System between 2021 and 2030. After over two years of discussions, in March 2018 the Official Journal of the European Union published the new Directive 2018/410 (EU), which amends Directive 2003/87/EC (the ETS Directive). Member States are required to transpose the regulation by 9 October 2019.

To speed up the emission reduction process, as of 2021 the total amount of emission allowances will fall at an annual rate of 2.2% compared with the current rate of 1.74%. The market stability reserve (MSR) - the mechanism introduced by the EU to reduce the surplus of allowances on the carbon market and to improve the resilience of the ETS to future shocks - will be significantly strengthened. Between 2019 and 2023 the quantity of allowances in the reserve will double to 24% of the allowances in circulation.

The regular feeding rate of 12% will be restored as of 2024. As a long-term measure to improve the functioning of the system and if not otherwise decided during the first review of the market stability reserve in 2021, as of 2023 the number of allowances in the reserve will be limited to the previous year's auction volume. All allowances held in the system above this quantity will no longer be valid. The amended EU ETS Directive contains predictable, strong and fair regulations to combat the risk of transferring CO2 emissions. The system of free allocation will be prolonged for another decade and has been revised to focus on sectors at the highest risk of relocating their production outside of the EU.

These sectors will receive 100% of their allocation for free. For less exposed sectors, free allocation shall be phased out after 2026 from a maximum of 30% to 0 at the end of phase 4 (2030). A considerable number of free allowances will be set aside for new and growing installations. This number consists of allowances that were not allocated from the total amount available for free allocation by the end of phase 3 (2020) and 200 million allowances from the MSR. Finally, more flexible rules have been set to better align the level of free allocation with actual production levels. Overall, more than 6 billion allowances are expected to be allocated to industry for free over the period 2021-2030. 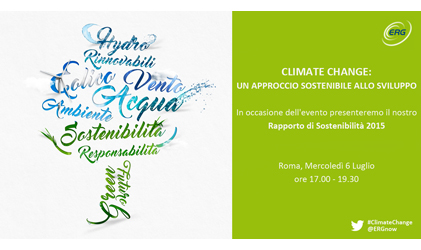 At the event "Climate Change: a sustainable approach to development" that we organized at the headquarters of Civita in Rome on July 6, we presented the 2015 edition of our Sustainability Report. After ERG Group's Chairman, Edoardo Garrone, introduced the event, Mario Tozzi, a geologist and science writer, gave his keynote speech, dedicated precisely to the issues of climate change.

The conclusions were drawn by Ermete Realacci, President of the Commission for Environment, Land and Public Works of the Chamber of Deputies.

We followed the event with our live tweeting and a live Periscope broadcast on our @ergnow Twitter channel.
Page updated at 29 Apr 2019