Our facilities are located in the Terni hydroelectric complex, an integrated electricity production system within the water catchment areas of the rivers Velino, Nera, and Tiber.

The complex includes 19 plants, 7 dams, 3 reservoirs, and a pumping station. It extends into 3 regions - Umbria, Lazio, and Marche – as well as the municipalities of Terni, Perugia, Rieti, and Macerata.

It is so large and complex that a drop of water takes 10 hours to come down from the highest part to the lowest. For us, it is a key production facility, which directly feeds our energy management system. Its main advantage is that it is an integrated system that can adjust its output and has an extremely significant production in terms of quantity.

The system is based on state-of-the-art technology, and is managed in real time and very efficiently by a single operation centre, which is located in Terni. The fully digital control centre opens and closes the dams, allocates the flows, and responds to programming requirements. The remote management is implemented by a latest-generation system. 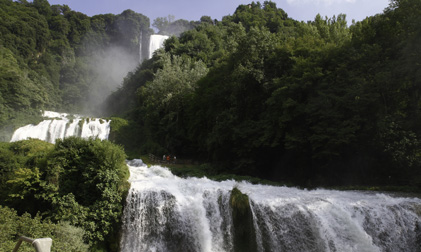 The system is well integrated into its territory and is located in a significant natural area: part of the complex is located inside the Nera River Park (Parco fluviale del Nera), a protected area along the bed of the river and its major tributaries, which includes the Cascata delle Marmore (Marmore's Falls).

Within the Park, the conservation and protection of its natural areas coexist with a historically strong human presence, that has developed a rich and complex cultural heritage, a valuable asset on its own, worthy of protection and promotion.

History and Structure of the Terni Complex
In the areas where the Terni hydroelectric complex is located, flowing water has been providing energy to manufacturing activities since the 3rd century BC, when the Roman consul Curio Dentato guided the reclamation of the plain around Rieti.

The works included the construction of a canal between the river Velino, then a stagnant lake, and the Nera river, over a 165-metre-high cliff known by the name of Cascata delle Marmore (Marmore's Falls), one of the highest waterfalls in Europe, with a height of 165 metres. To this day, the complex, which is a key hub in the Italian grid of hydroelectric power stations, consists of 38 production units and operates using a central basin, flowing water, pumped water and a reservoir.