Dams, rivers, conduits: mechanical energy turns into electricity. Did you know that Francis, Kaplan, and Pelton are names of turbines? Have you ever wondered where the water goes? Find out below how a hydroelectric power plant works: how the water moves for kilometres to drive the blades connected to the alternator and then be turned into electricity.

Hydroelectric power plants transform the hydraulic energy of a natural or artificial waterway into electricity. To do so, they use the potential mechanical energy of a body of water at a certain altitude to drive, with the water flow, the turbines, which are at a lower altitude .

The power of a hydraulic system depends on its jump - which is the difference between the altitude of the reservoir and that of the outlet of the turbines - and on its flow rate - the amount of water that flows through the turbines per unit of time. When there are several plants in series, water is collected at the outlet from the generating station and sent on to the next station, so it can be used in the next jump.

Doing so, proceeding downstream, the volume of water tends to increase, as tributaries add their water along the path of the series of plants. The water is therefore used several times by the plants to make the most of its energy content.

Discover water's path
Generally, a barrier is built on a watercourse to retain water and suitable waterworks pipe the water to a hydroelectric plant.
Two basic types of constructions are used: Water is shifted around within the system by means of water tunnels or open channels that transfer the water within the system by gravity or by pumping. Finally, the water is conveyed to the load tanks and, through penstocks, to the turbines of the hydroelectric plant. Penstocks are large diameter conduits installed along the line of maximum inclination, in which the water from the regulation basin builds up the speed needed to drive the turbine blades, as it flows down the jump between the source and the water's outflow. 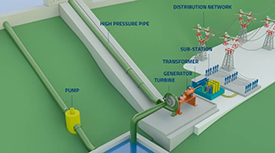 Discover through our infographics the different types of hydroplants: with artificial reservoir, run-of-the-river, pumped storage…

›Find out more
About turbines

Discover through our infographics
the different types of turbines:
Francis, Kaplan, Pelton.