Go with the Wind

The 2017 edition of the "Go with the wind!" environmental education project, promoted by ERG, endorsed by the Italian Ministry of the Environment and involving the Carabinieri, kicked off in Sicily on March 13, 2017.

The initiative is aimed at third-year secondary school students from the municipalities in which our wind farms are present and involves around 1500 pupils from Basilicata, Calabria, Campania, Molise, Puglia, Sardinia and Sicily. The "Go with the wind!" project, which has already enjoyed notable success, is now in its 4th year and forms part of the Social Responsibility activities we carry out in the areas in which we operate.

"Go with the wind!" seeks to raise the awareness of students and teachers around the active role the younger generations can play in contributing to safeguarding the environment and developing the culture of sustainability, particularly in the energy sector. The initiative involves classroom lessons that cover the topics of renewable energy, environmental issues and energy efficiency, and these are followed by a guided tour of a wind farm, during which the students can see how the plant and the individual turbines work.

Expert technicians illustrate the different operation phases, from the design and development of the farm to the production and distribution of electricity. 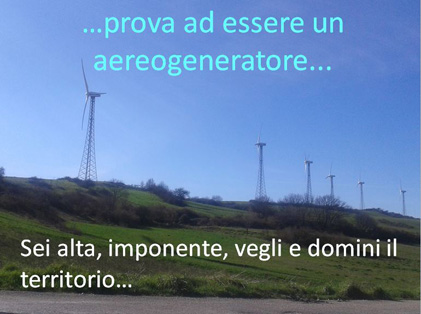 An image taken from "The Voice of the Wind"

(a multimedia PowerPoint presentation on the relationship between local residents and the wind farms in Val Fortore).

"Try being a wind turbine, you're tall... powerful... you watch over and dominate the region" 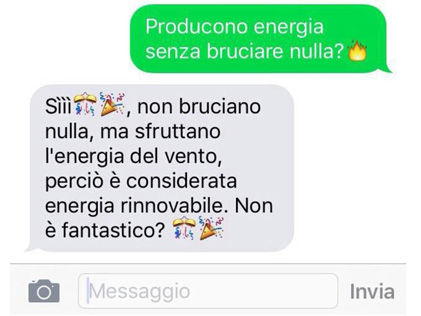 An image taken from "Renewable Sources - Four WhatsApp chats on wind power and the environment":

(a PowerPoint presentation which explains wind power through a WhatsApp chat).

"They generate energy without burning anything?"
Yes...! They don't burn anything but use the wind instead, so it is renewable. Isn't it great? 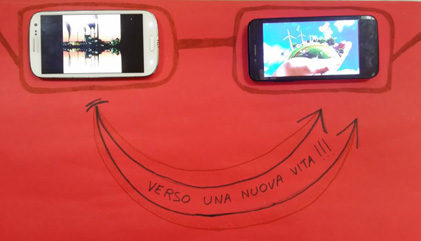 From "Digital photos: energy for a new life" 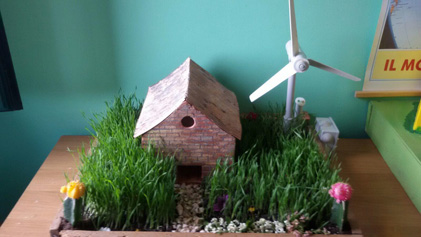 An image of a model rural wind-powered environment, rewarded with a superb educational documentary photobook.