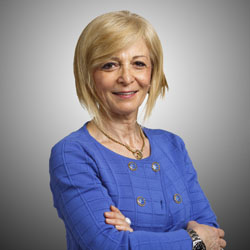 She graduated with honors in Electronic Engineering at the University of Genoa in 1987.

She then developed her career in Marconi S.p.A., a leading company in telecommunications technologies, gradually acquiring roles of increasing responsibility and becoming Senior Vice President Strategies of Marconi Mobile S.p.A.

In 2001 she joined Sirti Group, a leading company in the engineering of telecommunications networks, initially holding the position of Director of Strategies and Business Development. Then she was appointed General Manager of the Group and finally Chief Executive Officer.

From 2012 to 1st April 2019 she was CEO of Gruppo Fabbri Vignola SpA, a leading company in the food packaging sector.

Since 2010 she has served as non-executive Director of important Italian and foreign companies.

From 2011 to 2014 she was Independent Director of ATM - Milan Transport Company, also holding the position of Chairman of the Supervisory Body.

From 2012 to 2016 she was non-executive Director of Eutelsat S.A. and member of the Audit Committee.

From 2010 to 2nd April 2019 she was independent Director of SNAM, Chairwoman of the Control, Risks and Transactions with Related Parties Committee and member of the Remuneration Committee, after having chaired the committee for three years.

Since 2016 she is also an independent Director of Sagat S.p.A., the management company of the Turin airport.

Since 5 April 2019 she has been Non Executive Director of Fincantieri S.p.A.

In 2008 she was awarded the honor of "Knight" of Merit of the Republic by the President of the Italian Republic.