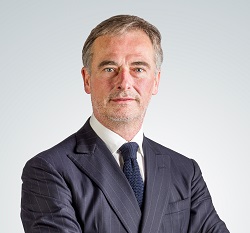 Alessandro Garrone was born in Genoa on April 28th 1963. He graduated in Economics in 1991.
In 1989 he married Carola Bozzo and they have three children called Maria, Filippo and Olimpia.

From April 2012 to April 2016 Chairman of the Board of Directors of ERG Renew SpA.

From December 2002 to April 2012 Chief Executive Officer of ERG SpA.

From August 2002 to December 2002 he held the post of Central Finance and Control Manager.

From January 1997 to December 1998, at ERG Petroli SpA in Genoa, he took on assignments regarding the company restructuring, in connection with the company's quotation on the Stock Exchange.

From August 1994 to December 1996, at ERG Petroli SpA in Genoa, he had duties within the Supply and Sales Management department, dealing with ship freighting and crude oil purchasing.

From August 1992 to July 1994, at ISAB SpA in Rome, we was responsible for company Management Control.

From September 1991 to July 1992 at ISAB SpA in Genoa and Syracuse he held the post of operative programming of the ERG Group refineries, via the use of linear programming models.