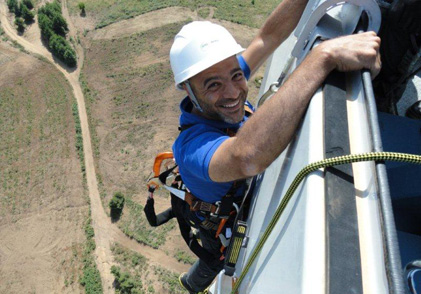 Hi...  Will you tell us something about yourself, what your duties are at ERG and how long you have been here?

Well, I have been with ERG for 16 years, and I can say that I have personally seen and experienced a few changes... I have been the ERG Renew (Remote Control & Continuous Improvement) control room manager since last January.

But when you joined the Group you had another job...

Yes. After working for Foster Wheeler Italiana during construction of the ISAB Energy wind farm, ISAB Energy management asked me to work as maintenance cost controller. I held that position since 2003. Then I was appointed civil and mechanical maintenance assistant, and I performed that job until 2007 when I went back to my first love, my job at Foster Wheeler Italiana as scheduler, in charge of scheduling the shutdowns.

How did the opportunity to make a change come up?

I would say that it was entirely fortuitous. Let me explain... After many years working in a sedentary position, I informally expressed my desire and curiosity to pit my skills with a more dynamic job. The opportunity presented itself when a colleague who received the offer to switch over to "Green Vicari" (the company that manages our wind farm in Vicari)  did not want to leave Siracusa... the rest is history.

Did you run into difficulties?

I would be telling you a lie if I said it was a piece of cake. I do not deny that there were enormous difficulties to overcome, especially in the beginning. I was putting myself on the line, starting over from scratch at the tender age of 40.
I was not familiar with the business. I didn't know my colleagues, and I wasn't even acquainted with the type of work.
I admit that in the beginning I was a leap in the dark, but I was optimistic and highly motivated.

My new working life was made up of continuous transfers to inaccessible locations, climbing up onto turbines at a height of 90 metres, taking part in the commissioning the Fossa del Lupo and Amaroni wind farms, meetings in Genoa, and then the continuous challenges of the Eccellenza [Excellence] Project (link, we will talk about it in the Sustainability section).
All of these events seem to be a long way off in time, but they were part of my job up until just a few months ago.

I don't think I will ever be able to forget some people with whom I shared so much, "good and bad luck", especially in the beginning:
Gianluca, Gianni, Carlo, Daniele and Rocco. With their enthusiasm and commitment, they made a huge contribution to the success and growth of ERG Renew.

And now... two hard questions: do you like your present job more than your previous one?

I absolutely prefer my current job. Now I feel that I am playing a more active role. I have grown professionally to a large degree and I believe there is still more room for growth.Every day I do my part by placing a building block with my name on it, good or bad as it may be.

I do not have to place the block inside an already defined place. I have to plan, create and then find the place where this block has to go, and this stimulates me much more. Sure, often there are no hours or Sundays, but we can't have everything.

Would you be willing to change "again"?

In general, I would say yes, because I like to change, and I like to have new stimuli and new sap for my work and my curiosity.

Perhaps I might think about starting over again from scratch. I would certainly make a change to have an organisational/management role, which perhaps would let me travel to other countries, learn new languages... and see new "scenarios".